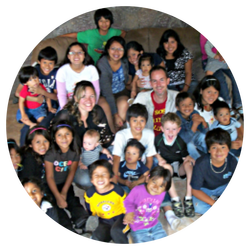 ​Serving as the Executive Director and Board Chairman of a counseling agency in Pennsylvania, a trend was being observed in the community. Caring families were adopting children from orphanages in Central America. However sadly, the placements were failing. In fact, some of the children and teenagers were so incredibly wounded, traumatized and acting out that they had to be taken out of their new homes and placed in State run residential care. At times, the adopted children were a danger to themselves and others. Many showed symptoms of depression, anxiety, phobias, stealing, lying, hoarding, sneakiness, sexually acting out, reactively attached, even suicidal tenancies and self-mutilating. And yet, these were caring, hardworking, stable, well established religious families who were adopting the children. They should have been excellent places for children. Clearly – these children needed something more – they needed healing in special ways. We were invited to get involved helping these precious children, teenagers and families.

In 2011, we moved our family to Guatemala to begin programs of healing and hope within orphanages and communities in crisis.

By invitation, we now also go to other third world crisis areas of the world and begin high-quality, innovative services and training, with a strategy to empower nationals to become expert missionaries to their own culture and country. Many volunteers and missionaries have joined our mission - and we currently serve families, communities and orphanages in Central America, North America and Asia.

Over the years of working in Central America with children and teenagers, these things have become clear: